What’s new about the New Church?

The Purpose of Life

The purpose of creation is a heaven from the human race. All people on earth—not just the “elect”—have the opportunity to choose and prepare for life in heaven. Good acts by themselves or confessions of faith by themselves cannot save a person. A person is not saved in an instant, but gradually readies himself or herself for heaven by a sincere effort to live a good life and shun evils as sins against God.

The Identity of God

The trinity is not a mysterious collection of three persons but rather a trinity of attributes: soul, body, and proceeding spirit. The Father is the invisible, infinite divine soul; the Son is the embodiment of that soul; the Holy Spirit is the spirit of truth which flows from God to all people. Humans are created in God’s image, and like Him, we have an invisible soul, a body which clothes and expresses that soul, and a spirit—an influence that radiates from us.

Our bodies don’t wait on earth for a physical resurrection. Rather, our spirits pass into the spiritual world after we die. Our spirits are not ghosts or wisps of air; we are still people, with gender, personality, memory, and senses. Angels are not separate creations; every angel lived first as a person in this world. Heaven is not a cloud. It is a world much like this one, with homes, cities, animals, sports, plants, topography, and governments. Similarly, hell is not a pit of fire, but a world where people live who deliberately deny God and hate their neighbors. In heaven, people serve others out of love and their happiness comes not from eternal praise or leisure, but from that useful service.

A Key to the Word

The Bible is not simply a collection of stories, histories, and dark prophecies. It contains Divine truth, conveyed in symbols. The Lord made use of a man named Emanuel Swedenborg whose unique talents suited him to the task of revealing the hidden truths in the Word. His theological writings hold a key to an internal meaning of Sacred Scripture. The truths they reveal are consistent with the Old and New Testaments and appeal to the rationality of the human mind.

The Second Coming is not a repetition of the first coming, nor is it the violent upheaval described in Revelation. The story of Revelation and other prophecies concerning the Second Coming are symbolic, not to be interpreted literally. The Second Coming is instead a coming in spirit: the spirit of truth which will lead people into all truth (John 14:17, 16:13). The Lord comes to each person in his or her mind, making it possible to approach the Word with a new understanding. He comes through the revelation of the Old and New Testament in the light of Swedenborg’s theological writings. 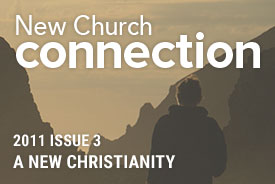