Making sense of the Christmas story

The imagery of Christmas is likely to captivate you, whether Christmas itself makes logical sense to you or not.

You don’t need to understand all the doctrine to want to be home for the holidays, but the holidays may be more satisfying if you see the reason for the season.

A message of hope

Christmas is about peace on earth, about freedom from captivity, about healing the broken-hearted. The confidence that this will really happen is what Christian faith is all about. Christmas is not just for children. It is a time for people to appreciate the wisdom and the grace of God.

The New Church teaches the Christmas story as written in the Gospels. According to New Church theology, every detail of the story is true, and every word is full of meaning.

The bright star shone in the darkness to represent the truth that had come to a dark world. He was laid in a manger because He would spiritually feed the human race. There was no room in the inn because there was no room for God in people’s hearts. He was born to a virgin because He was the Son of God, and also because a virgin stands for the pure love that accepts God into every person’s heart. He was born among the poor, because He was to “put down the mighty from their thrones, and exalt the lowly” (Luke 1). This is also why the angels did not appear to rulers but to simple shepherds. SA spiritual star appeared to the wise men, not because they were astronomers but because of the ancient wisdom they possessed.

The Christmas season is a celebration of ancient wisdom and the promise of peace on earth. May your holiday be filled with God’s blessings, and especially that blessing of a light shining in the darkness, amidst the songs of angels. 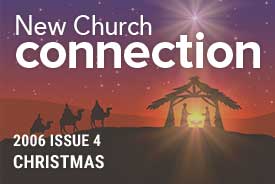