"We should serve in the newness of the Spirit and not in the oldness of the letter." (Romans 7:6)

In the media we have seen stories of conflict between atheists claiming the authority of science and creationists claiming the authority of the Bible. The basis for this argument is a literal interpretation of the story of creation in the Bible. Some say that this universe had to have been created literally in six days as stated in the Bible. Others claim that scientific evidence points to the universe being 13.7 billion years old.

How does the Bible interpret itself?

Many passages in the Bible suggest that it contains a deeper meaning. Jesus’ own words were symbolic. In fact, “He didn’t speak to the people without a parable” (Matthew 13:34, Mark 4:34). He said to His disciples, “These things I have spoken to you in figurative language; but the time is coming when I will no longer speak to you in figurative language, but I will tell you plainly about the Father” (John 16:25). Paul, too, warned us not to take everything literally: “We should serve in the newness of the Spirit and not in the oldness of the letter” (Romans 7:6). “The letter kills, but the spirit gives life” (2 Corinthians 3:6).

These statements in the Bible itself direct us to look for a deeper meaning, as if the literal meaning were a container holding precious contents, with a label that says, “Open me.” Now on the other side, there is not a single passage anywhere in the Bible that directs us to take everything literally. There is nothing on the box that says, “Do not open.”

What kind of light?

The first chapter of Genesis has all the marks of a symbolic story. For example, on the first day God created light, and made day and night, evening and morning. Then on the fourth day God created the sun, the moon and the stars. If the sun wasn’t created on the first day, then obviously the light on that day was not sunlight. So what kind of light was there in the beginning? The answer is in John chapter 1. “In beginning,” it says with obvious reference to Genesis 1:1, “was the Word, and the Word was with God, and the Word was God. He was in the beginning with God. All things were made through Him, and without Him nothing was made that was made. In Him was life, and the life was the light of men. And the light shines in the darkness, and the darkness did not comprehend it” (John 1:1-5). So the light which was in the beginning was not physical light, but the creative Word of God which gives life and light to all people.

Another indication that the story of Creation is symbolic is the fact that there are two creation stories in Genesis. The first chapter has all kinds of plants on the third day, birds and fish on the fifth day, animals on the sixth, and last of all human beings, male and female. Chapter 2 has a different order of creation: first Man, then plants, next animals and birds, and finally Woman. This reminds me of Jesus’ words, “Many who are first will be last, and the last first” (Matthew 19:30). Spiritual creation changes our priorities and the order of our lives.

Taking these two stories as literal, historical descriptions, we have to stretch and twist them to reconcile the conflicts. Looking a little deeper we see that the Bible was not intended either by God or by the original inspired writers as a scientific treatise. Rather, it focuses on a different level of creation. All created things are manifestations of the invisible qualities of God: “For since the creation of the world His invisible attributes are clearly seen, being understood by the things that are made, even His eternal power and Godhead” (Romans 1:20). Those invisible attributes of God are what create and sustain our spiritual life. As Paul wrote, “If anyone is in Christ, he is a new creation; old things have passed away; behold, all things have become new” (2 Corinthians 5:17). This is the creation Isaiah saw: “For behold, I create new heavens and a new earth; and the former shall not be remembered or come to mind. But be glad and rejoice forever in what I create; for behold, I create Jerusalem as a rejoicing, and her people a joy. I will rejoice in Jerusalem, and joy in My people. The voice of weeping shall no longer be heard in her, nor the voice of crying” (Isaiah 65:17-19). John describes it as well (Revelation 21:1-5).

If everything in creation is symbolic of God’s work within us, the new creation of our spiritual life, does the Bible tell us what each thing represents? Consider these passages:

Many of us are familiar with the creation story, but can it make us wise? Paul goes on to say, “All Scripture inspired by God, and is profitable for doctrine, for reproof, for correction, for instruction in righteousness, that the person of God may be complete, thoroughly equipped for every good work” (2 Timothy 3:16-17). Scripture being “inspired by God” literally means that it has the breath or spirit of God within it. It doesn’t mean that we get truth from the Bible by taking a purely literal approach, and still less does it mean that the Bible will settle scientific debates. Rather it means that by virtue of the spirit within it the Bible has teachings that help us become better people. The Bible becomes profitable when we see it as spiritual and apply it becoming better people in our daily lives. The truth in the creation story is the truth that makes each of us a new creation.

The Rev. John Odhner is an Assistant to the Pastor at the Bryn Athyn Church. For more information, visit www.brynathynchurch.org. 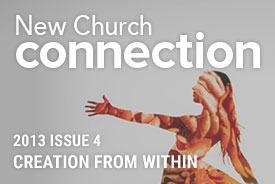