"Music is a way God uses as a way to reach us and express His Love and Truth."

Spirituality and creativity feed into each other so much. They both have an identity apart from each other, but when they come together, that’s when the best things happen. I’m a songwriter, and often times I write because I need to figure something out in my life, so I create music. It’s a process that helps me let the Lord lead and guide me, and ultimately be in charge.

Often as I write songs, they are a coping mechanism where I’m feeling overwhelmed and I just need to process what happens. Songs are very much a way to pull out different feelings and wonderings and existential crises I’m experiencing into something I can look at and play and set aside and return to if I need to. It turns all those uncertain emotions and thoughts into an expression, no longer just a cloud of who-knows-what just hanging above me.

Usually there’s an idea or a feeling or a theme that starts the songwriting for me. For illustration sake, when I was writing “Cathedral,” I was thinking about “How can I be a vessel for the Lord?” and the idea of the Bryn Athyn Cathedral sparked a lyric that I began working with. The feelings and ideas come first, which manifests in a song.

God very trickily speaks to me through music, when I think I’m speaking to Him through music. I’m thinking and writing and feeling and saying “What’s with this?” and “How do I do this?” and “What do I believe in this?”, I circle back when writing the music and see that and my questions have become His answers.

Another song called “Water of Life” I wrote when was having a breakdown. I was assessing myself, realizing my energy and emotion and spiritual reserves were at zero. I was thinking of the metaphor of water in my reservoirs, “They’re really empty right now, and they’re going to slowly refill. They HAVE to slowly refill, if it were fast like a waterfall, that would break me.” I was sitting at the Bryn Athyn Cathedral and the chorus lyrics just came into my head. To have such a super personal struggle within me and have it come to be outside myself is incredible—it’s not actually my struggle anymore. And that my struggle can have happened and be acknowledged and processed, and now it’s a song outside of me that other people are enjoying; it’s going on to serve other uses. I believe my voice, singing and writing music, is a tool that God gave me that He wants me to use. What an amazing tool! As much as I may struggle feeling inadequate—it doesn’t sound good enough, I’m not doing it right, people don’t like it—when it gets down to brass tacks, this is a gift the Lord gave me and I’m going to work with it the best I can.

I do hope that my music is adding beauty to the world as something people can listen to. I don’t know if they have the same experiences with the lyrics that I do. But if one person hears it and it was the thing they need, then it’s like offering water, being one drop of something they needed to help or start filling up their reserves. Music is an extension of me, and God coming through me. Sure, I want it to be all myself because I have an ego, but it also feels really great when it comes through me. It feels much more powerful and beautiful, the song just seems much more beautiful. Usually it’s relieving because those are the songs that I’m struggling with something, and I turn to music. Plus, I don’t have to make it perfect. There’s so much pressure that I put on myself to be the perfect everything, but if it’s coming from someone else, then it becomes more about the music and the song itself rather than me trying to make it perfect.

Music is a way God uses as a way to reach us and express His Love and Truth. He IS everything beautiful, so I think He IS music. I see it in my work all the time, it’s such a powerful medium to reach people and very different ways than words and actions. So, because I think the Lord is in everything, music is one of His more powerful tools to connect humans to Himself and to each other.

Often times, creativity is a label people put in a box. We may think some things are creative, like art, while many other things aren’t. But you can broaden creativity to anything you put yourself into; it could be being good with kids, or being able to make smoothies…everyone has something. If I had to define “creativity,” it would probably be as simple as “a way you are a conduit for God’s love.” Because we are not actually creating anything, He’s creating through us.

Woofenden is a West Coast girl in an East Coast world, busily finishing up a degree in music therapy. When she's not using music to smooth the transition from this life to the next in her hospice music therapy internship, she enjoys using music to smooth her own transitions from on moment to the next. When her fingers are too sore from playing guitar for either of these she resorts to connecting with people through words, preferably on a long walk, or over a cup of tea. 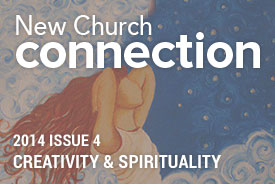 "The Lord's church is spread throughout the whole world. It is universal, then, and consists of all individuals who have lived in the virtue of thoughtfulness according to the principles of their religions."