There are many reasons that people feel despair: life circumstances, daily happenings, chemical imbalances resulting in depression, and many more.

But despair can come from other causes too. There is also spiritual despair. 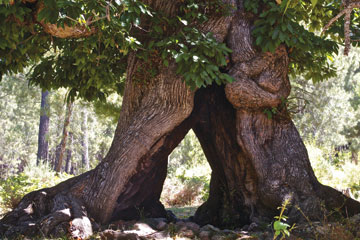 Spiritual despair occurs when you face the impossibility of your own redemption—when you look at your own dysfunctional behavior and at evil you discover in your own heart and cannot see any hope of change. Despair is often the final stage of the spiritual trials we call temptations. Spiritual despair causes you to feel like you’re drowning, like you’ve been punched in the gut, like you’re trapped under the ice, like you can’t draw a breath and soon will suffocate if you can’t manage somehow to escape the flood and suck in some air. In despair, things that once seemed certain—the existence of God, the love of friends, the value of life—fall to doubt and even rejection.

Despair is evil. It is not evil to despair, but it is evil that causes it. We are spiritual beings, surrounded by an unseen world that nonetheless influences us. There is a heaven and there is a hell, and hell doesn’t like you very much. Despair is a powerful tool hell uses.

Despair can cause you not only to kill yourself physically, but to attempt spiritual suicide as well. You decide, “Well, I’m not the sort of person who belongs in a church.” You might say to yourself, “What difference does it make what decision I make? It’s not like I’m ever going to heaven, anyway.” You declare, “There is no God, so it doesn’t matter which decision I make.” Despair sets you up for the next temptation, shatters your resolve so that you backslide into behaviors you had been trying to break free from. Like going on an eating binge just because you slipped once in your diet, despair can trigger a series of decisions that themselves lead to even more despair.

Don’t let despair get you. Spiritual despair tells you that you are no good. It’s a nasty trick, because it takes the very true idea that all goodness comes from the Lord and turns it on its ear. The Lord said, “I am the vine, you are the branches....Without Me you can do nothing” (John 15:5). Despair says there is no God, so there is no good. Or if there is a God, He wouldn’t help you, because you are no good.

That’s a lie. The Lord is forever flowing into every person’s heart, inspiring in every person a desire to do good. You just have to accept it. You have to give it a place in your heart to land. True, you cannot overcome your spiritual temptations, but if you let Him, the Lord can.

When someone is drowning, that person will instinctively act in ways that make it hard to be saved. A drowning person is dangerous. Ask a lifeguard. When you are in spiritual despair, your instincts are all wrong. Stop flailing. Surrender. Ask the Lord to save you from your despair, and then wait. He will save you, if you give Him permission. And He promises that after despair comes comfort; that after struggle comes rest; after combat, victory. Read the Psalms and see.

Moreover, when you are in despair, you are on the threshold of something good!

Spiritual rebirth is a result of spiritual struggle. Hell wouldn’t need to attack so fiercely if heaven wasn’t just around the corner.

God Himself has felt despair. He knows what we go through. He’s been there, and He’s defeated it. If you let Him, He’ll defeat it for you, too. In Secrets of Heaven 1787, it says this:

“All temptation is attended with some appearance of despair; otherwise it is not temptation…. They who are being tempted are brought into anxieties, which induce a state of despair concerning the end: the very combat of temptation is nothing else…. As the Lord endured the most direful and cruel of temptations of all, He, also, could not but be driven into despairs, which He dispelled and overcame by His own power.”

Faith saves. But faith isn’t saying a certain prayer or making a certain statement. Faith is living as if you trust that the Lord will save you. To be able to have that trust, you need to make an effort. Fight on a little longer. Do something for someone else, no matter how you feel about yourself. Take another breath. Trust in the Lord, and He will keep His promises.

I could say, “Don’t despair.” But despair happens without our choosing. Rather, when you despair, hope anyway.

The Rev. Mac Frazier is the pastor of New Way Church, in Austin, TX. For more information, visit newwayaustin.org or email him at Mac@NewWayAustin.org

"The Lord, from His Divine love by His Divine wisdom, provides the means which make it possible for every person to be saved."