A message of love

One of the first things to know about the crucifixion is that it is something the Lord knew would happen.

Picture them approaching the city of Jerusalem and being told again what would happen. “Then He took the twelve aside again and began to tell them the things that would happen to Him” (Mark 10:32). He said “Behold, we are going up to Jerusalem, and the Son of Man will be delivered…and they will…kill Him. And the third day He will rise again” (Mark 10:33,34).

The disciples were told that He would lay down His life. “No one takes it from Me, but I lay it down of Myself. I have power to lay it down, and I have power to take it again” (John 10:18). The thought of His being killed was so terrible to the disciples that they just could not believe that it would happen. And it was even more terrible when it actually did happen and the Lord suffered those things—being mocked, and cruelly treated and nailed to a cross to die.

The feelings that the Lord experienced are far beyond our imagining

He was not only suffering as to His body. He was being attacked by terrible forces from hell. He fought against and conquered those forces from His love of protecting the human race.

Think most of all of this—of His love for the human race—as you consider some of the things the Lord said while He was on the cross. Looking at the story in all four Gospels, one finds that the Lord spoke seven times while on the cross:

Listen to these words and remember His love

The first words were these: Father, forgive them, for they do not know what they do. Isn’t it amazing that His concern at that terrible moment was not for Himself, but for those who were harming Him! New Church theology tells us that “He prayed on the cross for His enemies, and thus for all in the whole world” (Arcana Coelestia 1690).

The Lord’s thought was for the whole human race and for each individual, and the next thing He said on the cross was spoken to one man—to one of the thieves who was crucified with Him. The thief had said, “Lord, remember me when You come into Your kingdom.” Jesus said to him, Assuredly, I say to you, today you will be with Me in Paradise. Earlier in His life, He had said, “And I, if I am lifted up from the earth, will draw all peoples to Myself” (John 12: 32). The Heavenly Doctrine says that the Lord “wills to save everyone and to draw him with mighty power to heaven, that is, to Himself” (Arcana Coelestia 1038; see also True Christian Religion 652; Arcana Coelestia 8604).

The third thing the Lord said on the cross showed His concern for Mary, who was His mother. We read: “When Jesus therefore, saw His mother, and the disciple whom He loved standing by, He said to His mother, Woman, behold your son! Then He said to the disciple, Behold your mother! And from that hour that disciple took her to his own home.”

Another thing the Lord said on the cross was, I thirst. Although He was truly thirsty, there was more to it than that. In the past He had told His disciples that His food was to do the work He came on earth to accomplish: “My food is to do the will of Him who sent Me, and to finish His work” (John 4:34). The Heavenly Doctrine says, “Because He came into the world to save humankind, He said, I thirst, which means that from Divine love He willed and desired the salvation of the human race” (Apocalypse Explained 386:30).

It was the cup He came on earth to drink, and the part that was very hard was a bitter cup. It was so bitter that He had prayed that He would not have to drink it: “If it is possible, let this cup pass from Me; nevertheless, not as I will, but as You will” (Matthew 26:39). But despite the bitterness, the Lord did each and every thing He came on earth to do. And when on the cross He said, It is finished, that great work of His was done.

The accomplishment of this great work brought a wonderful peace. That is why when He had risen from the tomb in which His body had been laid, He greeted His disciples with the words, “Peace to you” (see Luke 24:36; John 20:21,26). And in the Heavenly Doctrine, we are told that 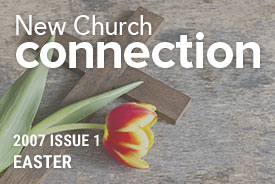