When Kim Adams saw that a local seamstress was running a quilting group for the Journey program centered around the story of creation, “Seven Practices of Peace,” she was delighted. She had sketched out an idea for a Seven Days of Creation project in fabric a while ago, so this was a perfect opportunity to follow through with the project. She learns a lot from what other people share, and it was really exciting to be connected to that instructional growth. “I love a group environment. I learn a lot about myself, and how others respond in relationships. I want to be a caring friend – though I’m not always – and I’d love to be loving and compassionate. I learn from people sharing their experiences.”

A deeper meaning to the creation story

Kim had always thought of the seven days of Creation in a very mainstream, visual way. Even though she knew there was a deeper meaning from growing up in the New Church, she’d never really thought about the Creation story that way, “To realize that the story wasn’t something outside of myself – to really get that it’s something deeper from it – totally floored me.” She wondered how there could be light and void simultaneously, as described in the first day of Creation. But as she delved into it, she began to understand that what we feel is the void, but the Lord is there waiting to work with us. “It’s not about creating the planet we live on; it’s about creating an environment nourished by the Lord. Not to be cliché,” says Kim, “but this is awesome stuff! More people should know about this.”

As described in the final day of Creation, she found the concept of “rest” very moving, and she likened it to this: We’re always cycling back through the whole process of creation, since there are always new challenges that come up in our lives: we’re always coming back to day one. The “rest” part is finding acceptance in that situation, whatever it is—“and you’re not going to find that peace until you’re willing to accept that it is what it is, God’s in charge, and you can’t control things and other people.” And that’s the peace, remembering that fifteen times a day, or it might only be once a month that you remember that the Lord’s in charge. But even that changes how you respond to stressful situations. When your car acts up, and two tires go flat, “if you just breathe and accept that you won’t be able to drive your car for the rest of the day,” it gives you a chance to be grateful for the amazing friends who will lend you their cars or drive you places. “That is His gift—there’s nothing magical about it.”

About her experience of going to church during this Journey program, Kim says, “Going to church and being involved in formal instruction is very nurturing. I mean, I think about the Lord every day, and gratitude comes pretty easily, but there’s something to be said for attending church and participating in study.”

“And my group came at a good time. It’s funny how that works—I don’t think I was particularly stressed or struggling—but I just made a commitment to do it.” Kim reflected that family things had interfered in the middle of the campaign, which had led her to miss two of the meetings, but even so she kept up with the group and was fed by it: “It was a great oasis.” Her group leader was a delight to be around, and her fellow women were insightful. She was too distracted by the enjoyable social experience of being in the group to do her quilt squares there, but she’d take her project away with her, and have fun “making a big mess” at home.

She says she just wants other people to know “how much joy there is in life! . . . you just have to reach out and make the commitment . . . And this has been a big helping of joy!” About being in a small group specifically, she says that finding a group you’re comfortable with is important. “In a group setting, I wouldn’t want to tell people just to trust, because that’s a big deal – another Journey group might not have felt right – but I went into my Journey group with an open heart, and it ended up feeling fine.”

Every group is different, so the exact experience can’t be predicted, but she says, “Just come with an open heart, and be there to learn and to grow!” 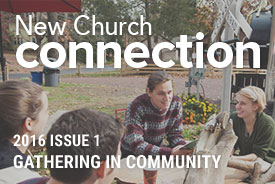