Why does a loving God permit evil?

The brutal murder of twenty children in Newtown, CT remind us that tragedies happen suddenly, unexpectedly, and in the most unlikely places—even in elementary school classrooms. But sudden tragedies are not limited to the insane actions of deranged people.

Highway accidents claim the lives of 40,000 people each year, leaving behind grieving friends, bereaved spouses, and children who will be raised without their parents; a fire sweeps through a community, destroying thousands of homes and taking numerous lives along the way; an underwater earthquake erupts, unleashing a tsunami whose killer waves destroy over 200,000 people.

When things like this happen, sometimes well meaning people try to comfort one another by saying things like “It’s God’s will.” “It’s for the best.” “There’s a reason for everything.” “God must have needed your loved one.” “Someday you will look back and see the silver lining.” Some people push back with a different answer. “This proves that there is no God,” they say. “If there were a God, things like this would not happen. This was simply a senseless act of violence in a world without God. ”

Each of us tends to judge the reality of God by what happens on earth. At a recent championship hockey game, when the penalties all seemed to be going against Bryn Athyn College (where I am a professor), I found myself in sympathy with the fans who were complaining about the unfair officiating. But when things changed, and the opposing college was appropriately penalized, I heard myself shouting, “Yes, there is a God!”

Of course, I knew better, but that’s just how it feels. When things are going badly or unfairly, it seems that we live in a world without divine justice—in a world without God. But when something wonderful happens in our life, we quickly change our tune. We begin to feel that God must exist. “God is so good,” we say. “God is so good, to me.” In either case, it comes down to this: the denial or acceptance of God is based on what happens on earth.

And this is precisely where we miss the point. What we see happening in this world cannot be used to prove or deny the existence of God. I’d like to believe that Bryn Athyn College’s victory, which clinched the league championship, is an example of divine justice—but that just isn’t so. It is wrong thinking. It may be that a senseless act of violence in Newtown shakes our foundation, but it would be wrong to conclude from this that God does not exist. And it would be worse to conclude that this is some sort of divine punishment.

Were the Galileans worse sinners?

Two thousand years ago, the prevalent idea was that a God of justice punished people for their sins. In the Gospel of Luke, for example, there is a story about some Galileans who were brutally murdered by Pilate (Luke 13:1-5). “Do you suppose,” said Jesus, “that these Galileans were worse sinners than all Galileans because they suffered these things?” (Luke 13:2). And then, He added, “I tell you, ‘No.’”

When a devastating earthquake tore through Haiti in 2010, leaving 250,000 people dead, some religious leaders said that the Haitian people had brought this upon themselves because they had not turned to Christ. In other words, some people believed that they were being punished by God for their pagan beliefs. According to Pat Robertson, a leading Christian fundamentalist, “This is what happens when you swear a pact with the devil.”

This kind of thinking is similar to the thinking of the people who supposed that the Galileans were murdered because they were sinners. But Jesus corrects their wrong thinking. “Do you suppose that these Galileans were worse sinners than all Galileans because they suffered these things?” He says. “I tell you, ‘No.’” And then He adds, “But unless you repent you will all likewise perish” (Luke 13:3).

In another story, the disciples see a man who was blind from birth, “Who sinned,’ they ask Jesus, “this man or his parents that he was born blind?” (John 9:2). Jesus tells them that “neither this man nor his parents have sinned, but that the works of God should be revealed in him” (John 9:3). Jesus again corrects their wrong thinking, teaching them that God did not cause the misfortune, but He will use the misfortune to bring about great works.

But here we must make an important qualification. It is true that God never punishes us for our sins; rather, we are punished BY our sins. For example, those who hate others, and hate God—and do not repent—will eventually be consumed by the fire of their own hatred. That’s why Jesus adds, “But unless you repent you will all likewise perish.”

To repent means literally to change ones thinking. In this case, Jesus is urging them to change their thinking about “divine punishment” for sin. He wants them to see the world rightly. He wants them to know that the world is not a divine theatre where God inflicts punishments for sin and doles out rewards for righteousness. Rather, the world is the unceasing operation of God’s love and wisdom, flowing continually into all who are willing to receive.

Consider the story of Elijah—the prophet who took refuge in a cave during a violent storm. Like Elijah, we sometimes find ourselves so discouraged by the storms of life that we find ourselves in a dark cave, unsure about what is true. Outside there is “a great strong wind that tears into the mountains and breaks the rocks in pieces. . . . And after the wind an earthquake. . . . And after the earthquake, a fire (see 1 Kings 19:11-18).

The violent death of innocent children in Newtown, Ct, the massacre of college students in Blacksburg, VA, a tsunami in Japan, or an earthquake in Haiti can shake our core beliefs in a loving God. And when misfortune hits closer to home, our faith is challenged. The loss of a loved one, the failure of a business venture, a car accident, an unwelcome medical diagnosis, even a fight with a dear friend can leave us uncertain and unsure. We feel the tremors at our very foundation.

It is clear that a physical cave cannot protect us for long—not when the rocks are already breaking, the mountain is shaking, and the fire is raging. These are the times when we need something deeper—something more potent than the most powerful wind or storm or fire. This is when we need to listen for the “still, small voice” within us. It is the quiet, inner call to come out of the cave—to come out of our ignorance—and into the light of spiritual truth.

It is “still” and “small” because it does not force or compel. It is just a gentle whisper; and yet, it is infinitely more powerful than any force in the world. It is the power of truth from love.

This is because God’s kingdom is not of this world. God’s kingdom is within each of us, in a still small voice that continually whispers, “Come out of the cave, and see the truth! I am not in the wind, or earthquake or fire. I am in you, leading you, guiding you strengthening you, whenever you freely choose to hear My voice and turn to Me.

The story about the murdered Galileans teaches us that God is not a God of punishment, nor is He the cause of human misfortune. Life will have its storms, and its tragedies, but God is not in the storms or the tragedies. When Elijah came out of his cave, he clearly saw that God was not in the wind, not in the earthquake, and not in the fire.

How are we to understand this? Does it mean that God is not concerned with the outer events of our daily lives? Does it mean that God is not involved when misfortune comes our way? It cannot be so. Emanuel Swedenborg writes, “The least things of all, down to the least of the leasts, are directed by the Lord’s providence, even as to our very steps” (Secrets of Heaven6493).

Somehow, then, God is deeply involved in every moment of our lives. But there is an important difference between seeing God as involved in our lives and seeing Him as the cause of our misfortunes.

In other words, God permits evils but does not cause them.

OK. But why does He permit them? Again, we turn to the teachings given through Emanuel Swedenborg: “Nothing whatever, not even the least thing may arise except that good may come of it” (Secrets of Heaven 6574). Misfortune, calamity, and disaster are permitted only if God foresees that some good may come out of them.

In itself, there was nothing good about Pilate’s murder of the innocent Galileans. But Jesus was still able to bring good out of this incident. He used it to teach a new way to think about the relationship between external events and God. And He used it to remind His listeners that they would be miserable unless they changed their way of thinking: “Unless you repent,” He said, “You will all likewise perish.”

Jesus then makes a similar point about how to understand misfortune. This time it’s not about a cruel murder, but rather about a natural accident: “Or those eighteen upon whom the tower in Siloam fell and killed them, do you think they were worse sinners than all other men” (Luke 13:4). Again, Jesus tells them “No.” This accident did not occur because these men were sinners. It was not a divine punishment for human sin. Jesus then uses it to illustrate His main point, which He reiterates: “Unless you repent, you will all likewise perish” (Luke 13:5).

In itself, there is nothing good about the massacre of innocent children in Newtown, the cold- blooded murder of college students in Blacksburg, a tsunami in Japan, or an earthquake in Haiti. But God can use any earthly event, no matter how tragic, to strengthen our faith and deepen our love. This is how He can bring good out of evil. But a good and useful result never turns evil into good, or wrong into right. And it never means that God caused it in order to bring about a greater good. Allowed it, yes; caused it, no.

The Kingdom of God

This world is filled with ups and downs, successes and failures, victories and defeats. There are storms, earthquakes and fires that destroy thousands of lives. These things happen—but God does not will or cause them. To look for evidence of God’s will in the outer events of our lives, whether it be the murder of the Galileans, the fall of a tower in Siloam, an earthquake in Haiti, or a bad call at a college hockey game, is to miss the whole point of Jesus’s teaching. As He said Himself, “My kingdom is not of this world” (John 18:36).

It all comes down to this: the kingdom of God is not of this world. It is within us, above and beyond the vicissitudes of time and space. Evil is permitted, it is true, but only so that good may come from it. It is never a divine punishment. Although God allows evil, He is constantly endeavoring to lead us away from evil into goodness, away from ignorance into light. Wonderfully, secretly, God is doing this continually in each of our lives—just as He led Elijah out of the cave so many years ago.

Rev. Dr. Ray Silverman serves as a professor at Bryn Athyn College and has authored many books including Rise Above It and The Core of Johnny Appleseed.

This article is an excerpt from Audio DVD's “Introduction to the New Church” (updated and revised by Rev. Dr. Ray Silverman) 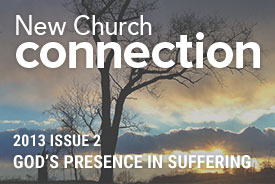