“But Mary stood outside by the tomb weeping, and as she wept she stooped down and looked into the tomb. And she saw two angels in white sitting, one at the head and the other at the feet, where the body of Jesus had lain. Then they said to her, “Woman, why are you weeping?” She said to them, “Because they have taken away my Lord, and I do not know where they have laid Him.”

Now when she had said this, she turned around and saw Jesus standing there, and did not know that it was Jesus. Jesus said to her, “Woman, why are you weeping? Whom are you seeking?” She, supposing Him to be the gardener, said to Him, “Sir, if You have carried Him away, tell me where You have laid Him, and I will take Him away.”

Jesus said to her, “Mary!” She turned and said to Him, “Rabboni!” (which is to say, Teacher). Jesus said to her, “Do not cling to Me, for I have not yet ascended to My Father; but go to My brethren and say to them, ‘I am ascending to My Father and your Father, and to My God and your God.’” Mary Magdalene came and told the disciples that she had seen the Lord, and that He had spoken these things to her.”

The Easter story is recounted in slightly different ways in the four gospels of the New Testament. Jesus’ words to Mary in this account fit with other details of the story and hold a message about your relationship with the Lord.

In the Matthew account, for example, Mary Magdalene is accompanied by “the other Mary” when they come to the tomb at dawn. They experience an earthquake, they see an angel descend from heaven, they watch him roll back the stone, they see the reaction of the guards, and they receive a relatively full explanation from the angel. Their fear and grief is replaced with joy, and they run from the tomb to tell others. As they are running they meet Jesus. They recognize Him and hold Him by the feet, worshiping Him.

The account in John is different. Mary comes to the sepulcher alone while it is still dark and discovers the stone rolled away. After fetching John and Peter, who investigate the scene, she lingers behind. She does not experience the earthquake, see the angel come down, or see him roll back the stone. She weeps and looks into the tomb. Only then does she see the angels, but they don’t explain anything to her, they only ask her questions. When she does see the Lord she does not recognize Him, and He asks her not to touch Him.

Both stories illustrate Mary’s deep love for Jesus. But in the John account Mary is in the dark, she is alone, she does not understand, she lingers at the tomb looking into it, and she does not recognize Jesus, despite her love. In Matthew she is not alone, it is dawn, she sees what happens and understands, she does not linger at the tomb but runs to tell others, and she immediately recognizes Jesus and holds Him.

What is the message? In life we often feel alone and in the dark, and our focus can tend toward the things represented by the tomb in this story—anxious, self-centered, and worldly concerns. These hold us back from recognizing and embracing the God we adore. But if we can gain an understanding of what life is about, and focus on others, Jesus meets us on the way.

By Rev. Jeremy Simons, Pastor of the Bryn Athyn Church in Pennsylvania (www.brynathynchurch.org). 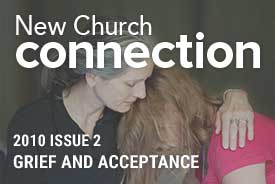