Changing lives: finding “the one”

by Coleman and Anne Glenn

Coleman:
Anne and I met at a friend's wedding in December, 2011. We’d been recruited to teach swing dancing together at the reception. Swing dancing turned into conversation, and we spent the last several hours of the reception alone in the lobby, locked in conversation about faith, life, love, God, and everything else. The time flew by – and unfortunately, I was flying back to Pennsylvania, and Anne was scheduled to move to Singapore the next week!

Anne:
The next day, I texted Coleman. He replied via facebook, and soon we were sending long messages back and forth. I very quickly couldn’t imagine life without Coleman but was wary– I’d been in love before, and had my heart badly broken. So while I wanted to love him, I was resistant and cautious. One afternoon on my lunch I found myself in a Christian-owned café, listening to lovely contemporary Christian music while I was journaling and praying about our relationship– basically telling my heart to SLOW DOWN! And as I sat there praying, thinking about Coleman and all of the things I admired in him and loved about him, it hit me– I was in love with him.

Coleman:
From the beginning, I wanted to approach our growing friendship and relationship with the attitude that the most important thing was to seek the Lord’s will and to do it. If that meant we found out that we weren’t going to end up being anything more than friends, then I was prepared for that. It was an incredible blessing to find that Anne had the same attitude– that above all else she wanted to follow the Lord and do His will. We talked to each other about how great a comfort it was that we both loved God more than we loved each other. So later on, for example, when we started talking about marriage (in general terms), I could tell her that whoever I was going to marry would be someone who completely loved the Writings for the New Church, without that coming across as telling her that she had to be that person.

I didn’t have an “aha” moment like Anne did of realizing that I was in love with her, but I was saying “I love you!” in my head (and out loud after we’d hung up on Skype) for weeks before saying anything about it to her. Even when we started to talk more about caring for each other, I resisted saying, “I love you.” I wanted those words to be special, to save them for a time when they were really the last step before saying, “Will you marry me?”

Anne:
Very early on we talked about visiting one another so that we could spend some time in person. As our relationship progressed, we made plans for Coleman to come to Singapore in August. The wait for that visit seemed incredibly long at times, but it is truly amazing how much God worked and moved in our hearts and minds during the time we were apart. As spring turned to summer and we began to discuss long-term plans, we mutually came to the decision to take our relationship one step further: to say ‘I love you’ (out loud, in English). By that time I was sure. Sure that I wanted to marry him, sure that he was the one God intended for me. And I knew he loved me. But I wasn’t sure that HE was sure…

Coleman:
As the spring came to an end, I was becoming more and more sure that Anne was the one for me. More and more I was becoming convinced that we saw the Lord in the same way, that we cared about the same things, that we really fit on the deepest levels. I’d prayed to the Lord, and in response gotten a sense that I could choose to marry Anne. I think it happens differently for different people, but that’s the way it was for me: not a Divine voice saying, “She is the one,” but a peaceful sense that if I loved her and believed that we would be eternal partners, that I could choose to ask for her hand in marriage. But I did not want to rush things. I was fairly confident (OK, that’s an understatement) that I’d feel the same after we’d spent some more time in person, but it was important to me that we would spend that time in person. If waiting an extra few weeks meant being 100% sure rather than 99% sure, it was worth waiting a few extra weeks.

Of course, 99% sure was sure enough for me to order a ring…

Anne:
Finally, August came. The first days of the month were a blur as I ran around getting everything ready. Then Tuesday, August 7th arrived, and I headed to the airport to meet Coleman’s flight. I found the right terminal and waited… and waited… and waited… I was jumpy and excited and started to cry every fifteen seconds– definitely suspicious. Then all of a sudden, there he was!

Coleman:
After a bit of an ordeal, I made through the airport, and finally saw Anne again, in person for the first time since the wedding. I headed through the sliding glass doors past customs, dropped my suitcases, and Anne rushed into my arms. It was the most amazing thing– it was the first time we’d really hugged (except for a quick hug goodbye at the wedding), but it felt like the most natural thing in the world. It just was just right; we just fit. It was exactly where I belonged. On August 11th, in the Singapore Botanical Gardens, I asked Anne to marry me – and she said yes!

Coleman and Anne Glenn were married December 30, 2012 and are expecting their first child in November. They live in Dawson Creek, British Columbia, Canada where Coleman serves as pastor of the Dawson Creek New Church. 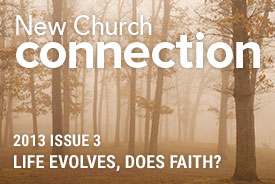