Changing lives: religion is not about ritual, but about love and service 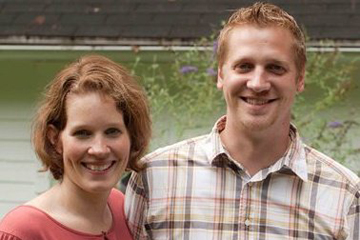 As a Catholic schoolboy, young Gregg Swierczynski had taken all the right steps. As an infant, he received the baptism. In 2nd grade he ate the wafer, taking in “the body of Christ.” In 4th grade he did ten Hail Marys and confessed his sins before a priest. In a swooping gesture that works “kind of like a magic eraser –until your next mistake” the priest absolved young Gregg of his sins. In 6th grade Gregg memorized answers to a list of questions, reciting words he didn’t understand. With all this completed, according to the Bishop, he had become a true, confirmed Catholic.

Now in his 30’s Gregg reflects, “Everything was a repetitious study, and I felt like I was going through the motions.” He taps his heart. “I didn’t really feel anything.”

Gregg’s parents had worked hard to send him to a Catholic school. With finances tight, they cut back to make school a priority. However, Gregg’s father, a devout believer in the Bible but wary of the goals and agendas of organized religion, refused to attend church himself. Instead of emphasizing the authority of a priest, bishop or pope, Gregg’s father taught his children to “go to the Bible yourself” and to “always fear God.”

The numb ritual of mechanized religion, as well as the idea of “fearing God” did not sit well with Gregg. Fear was something that Gregg would work hard to overcome in his life on his way to learning to truly feel. Years of hard partying in his 20s, and an aimless, self-serving lifestyle would create in him a false sense of security and happiness. It would take a significant mental shift to crack this shell and make some bold decisions. But it happened. Gregg eventually overcame the fear of committing to the woman he loved, the fear of opening up deeply to others, and the fear of fully embracing a life of service and community. With these fears broken, Gregg speaks of a new level of happiness that he feels – one his old friends can’t even fathom when they ask him why he always seems so “up.”

So what brought about this change? Gregg points to a specific turning point in his life: the fateful Thursday night in 1997 at an Italian Bistro. It was the night he first saw Kerry. Kerry, a beautiful auburn-haired girl, was out to dinner and Gregg waited on her table. The two felt a spark of attraction, and soon after, began dating. Kerry says, “I saw something more in him, something he wasn’t able to see at the time.” Gregg added, “She says she always knew there was something good in me.”

During the next six years, Kerry would often bring Gregg to her hometown of Bryn Athyn, PA, a town dedicated to the New Church that Gregg viewed with “hesitation and skepticism.” Kerry said, “I tried to integrate him into my life in Bryn Athyn, but it never worked.” Gregg wondered, “What’s the catch?” He explained, “The grounds were so beautiful and the people so friendly. I didn’t get it at all . . . and I didn’t want to either.” Gregg would ask, “If you guys have the right answers, why aren’t you as big as Catholics?” His hesitation applied in some ways to Kerry as well. “I always kept Kerry at a distance. I was in a selfish phase, and I thought I knew it all.”

As the years passed, Gregg began to appreciate some of the qualities of this unique small town, and realized he could let his guard down a little. In April of 2004, Gregg and Kerry married, and began raising a family in Bryn Athyn. A few years later, Gregg’s mother-in-law told him about a church service geared to newcomers called New Church Live, so he went. “Bam. I loved it instantly. It was refreshing to hear something that spoke to me and it made sense.” Gregg explained that the tone was conversational, and seemed to apply directly to his life.

Kerry was pleasantly surprised to see Gregg’s newfound excitement about attending church, and was impressed by his commitment. She said, “I work weekends, so that left Gregg taking our four kids to church with some help from his mother-in-law. Our kids were two, four, six and six at the time – not easy to get anywhere at one time, let alone church.” Most of all, she was pleased to see something beautiful emerging in her husband. “He was more positive and had an excitement about life, new and different from before.”

Over time, it became clear what Gregg had been missing in his experience of religion: the heart. He realized that religion is not about ritual, or hierarchy, or fear, but about love and service. “This church is about the care and service of others. God put us on this earth. I don’t know what for, but I know we have to do it with and for each other.”

Gregg experienced that kind of love and acceptance in the church community. Although he struggled with some issues, he felt supported, with people encouraging him just to do his best, and keep trying. “Not once have I ever felt like someone was yelling at me or criticizing me. So many times people have said ‘if you ever need anything give me a call.’ When my daughter was in the hospital the community even set up a meal program. It helped so much.”

Soon after he began attending worship services, Gregg experienced an incident that further strengthened his faith. “I had a bad strep, and none of the antibiotics were working. They gave me some narcotics, but the pain wasn’t going away. I felt hopeless and in fear and really prayed hard. I couldn’t control my throat. I couldn’t control the pain. I realized I wasn’t in control.” Finally, the fourth antibiotic worked. Gregg’s faith, however, had been taken to a new level. With his health restored, Gregg felt a sense of peace wash over him. “When the pain went away I was reflective and at rest.” He had come to a stark realization of his own limits. “That whole weekend humbled me.”

Gregg has gone on to fully embrace the role he can play in humbly serving others. In the church community he plays drums for worship services and leads children’s groups. In his work at the federal courthouse, he makes an effort to smile at people, and offer a kind word of encouragement. “It’s a great feeling to make someone happy. If someone comes in for the sentencing of a family member, that little dash of care truly helps. I have the hope that maybe if I’m kind to them, they’ll be kind to someone else.” Gregg, who loves to laugh, has even found that his humor has changed from sarcasm to a more “wholesome” humor – one that doesn’t put others down.

Although the newcomer messages were what initially appealed to Gregg, he is ready to learn more. Kerry said, “Recently he has been reading some books of the Writings of Emanuel Swedenborg, initiating more in-depth conversations, and has even joined a group to learn more about Swedenborg.” She added, “I am amazed how much spiritual growth Gregg has achieved and am excited to be there with him along his journey.” Gregg joked, “Wouldn’t it be amazing if I became a minister one day?” When asked whether he saw this as a real possibility, Gregg explained that his abilities lie in connecting with others. “Maybe one day I’ll be able to reach out and help people new to the church – I can help them the way others have helped me.”

Reflecting back on his father’s admonishment that he “fear God” Gregg has a new perspective. “I think what my dad meant involved letting go of our ego, knowing it’s not all about us, staying humble.” Gregg now sees all people as equally deserving of respect, whether pope or layperson, judge or basic citizen - even God no longer seems threatening. “Now it seems that the Lord works through and with us. It’s more of a partnership. I know I’m going to screw up. But if my heart’s in the right place, and I’m trying my best, that’s what it’s all about.”

Gregg and Kerry at Gregg's baptism. The couple lives in Bryn Athyn, PA with their four children.) 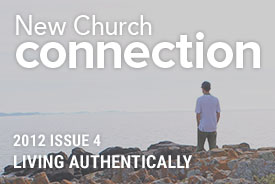