"Ask and it will be given to you; seek and you will find; knock and the door will be opened to you." (Matthew 7:7)

Being alone with God

How have you incorporated being alone into your spiritual practice?

Several years ago I went on a vision quest retreat with about twelve other guys on a 600 acre property in the Poconos. We all arrived Thursday night for a briefing. The vision quest consisted of being alone in the woods for three days while fasting, praying and meditating on a question that I was seeking an answer to. I canʼt recall now what my initial question was, but I came to realize that the question I had started with wasnʼt really what I wanted to know. But I did get the answer I needed.

On the way up to the weekend I was meditating on that quote from the New Testament, "Ask and it will be given to you; seek and you will ﬁnd; knock and the door will be opened to you” (Matthew 7:7). Ask. Seek. Knock. It makes a great acronym. Itʼs laid out for us right there and it starts with asking.

Friday morning I was taken to my designated spot and instructed to stay within a 30 foot (or so) radius of that spot. I didnʼt have a problem being in the woods alone but what I didnʼt expect that ﬁrst day was how bored I would be. I was really bored. I found myself looking for things to distract me from my task. It became redundantly clear to me how often in my day-to-day life I choose to be distracted and by how many things exist in our culture that can be used for that purpose. Eventually, I was able to be still and focus. “Ask,” I thought. So I did.

Sitting cross-legged on the forest ﬂoor, I asked God to make it obvious what I really wanted to know. Soon it became clear that what I wanted to know had to do with worthiness. Am I worthy? Does God approve?

After ﬁnishing my prayer a little tan spider started crawling up my right arm. I lifted my hand to smack it off and something inside me made me pause. Letting go of a reaction to defend myself I lowered my hand and let it crawl up my arm. Up it went and around my neck. It tickled so much! I almost couldnʼt take it anymore! Cringing, I let it crawl. It continued across my left shoulder and down to my chest. It then let out its silk and gracefully descended down. It landed on my thigh then crawled back up its silvery line. With such care and gentleness it began to weave a web over my heart.

“Be still,” I advised myself as I watched in silent wonder. “Be still—breathe slowly —be still.”

It was raining later that night. I was lying under a tarp to keep dry and trying to get some sleep. I was really hungry; the last time I ate anything was the night before. I couldn’t stop thinking about a half eaten piece of lemon pound cake I had left in my truck, which was parked about a mile and a half away. I was feeling weak on every level. The thought of two more days without food was discouraging and I started to get angry. I was tired but couldn’t sleep, hungry but couldn’t eat. The rain popping on the tarp was getting more annoying, more unbearable with each passing moment. “Shut Up!!!” I screamed. I felt even more exhausted after that outburst.

I was going to quit and go home. I had had enough. I decided I would try one more thing and if it didn’t “work” I was outta there. “Help!” I shouted to God.

In a state of surrender, alone, huddled under a tarp in the woods, hungry, weak and about to give up on my vision quest my thoughts went to that spider’s web and how it seemed to be mending my heart. Then my thoughts went to my question, Does God approve? The rain had stopped. I pulled the tarp off and fell asleep, my mind still holding my question, Does God approve?

My spot in the woods was under a thick canopy of trees. There was this one little area above me where I was able to see the sky. I was awakened from a dream in which I heard three loud knocks followed by my own voice saying, “Three knocks from within.” I opened my eyes, and in that little space in the canopy, was the brightest moon, in the shape of the biggest smile, answering my question, “Does God approve?” Indeed!!!

I knocked and it was opened to me. The Lord within me answering with a big smile, happy to see me and I Him. Whenever I see that crescent moon, that moon-smile, it reminds me the Lord does approve. Even in the darkness, in those times the sun isn’t shining. When we’re in lack of integrity, feel we’re not doing it right and the voices are loud that we’re not worthy, in those times, there’s God smiling. It was so clear. It was my soul telling me, coming from a part of me that’s in every one of us connected to God. What I really wanted to know was answered clearly. And I don’t doubt that anymore.

Rich Show and his wife Anastasia own and operate Show Gardens & Crafts. Rich is a housemaster at the Academy of the New Church boys' dorm and is active in men's work. He serves on the board of SWET (Spiritual Warfare Effectiveness Training). For more information or to register for a SWET weekend visit www.swet.org. 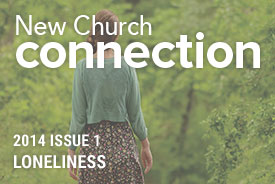