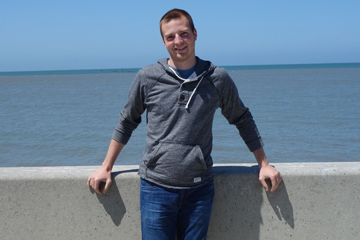 “I enjoy the theology of the New Church because it provides clarity on the purpose and necessity of charity.”

Zach Franzen grew up in Minnesota, in a suburb of Minneapolis. He was baptized as a Lutheran and took religion classes so that he could be confirmed at age 13. For Zach, going to church and taking these classes did not feel like a religious experience, but a reflex; it was “just what you do.” He continued going to church occasionally with his family, yet he never felt any curiosity or excitement about the religion. By the end of high school, Zach had become skeptical of religion in general, and had doubts about God. He even began to struggle to find meaning in life. He had always believed in living a good life but started to feel that his efforts to do the right thing were not meaningful or appreciated. Without the kind of spiritual guidance he yearned for, Zach felt “lost and helpless.”

When Zach was about 21, he remembers coming to a desperate place where he prayed, “If there’s anything good out there, please help me. I just want the truth.” He wanted some way of knowing that he was living a life of integrity, and that he could proceed with a sense of purpose and direction. After this prayer, Zach began to feel some peace. It wasn’t an overwhelming feeling, just a subtle reassurance and conviction that everything was going to be okay. This sense of peace gave him the energy to start seeking answers to his questions.

He started his search by picking up the Bible and reading the New Testament. He found that it had more personal meaning than he had ever realized. The Bible seemed deep, holding far-reaching implications for his own life. Zach felt that the Bible spoke to him on an individual level and he was motivated by this to continue on with his spiritual journey. Zach said that the parables and teachings of the New Testament seemed to be “for everyone, for everyday life, and not just for ministers or saints to understand.” He began to see the Bible as “not just a historic text but a guidebook for everyday life.”

At his point in Zach’s life, he had been in college studying architecture. When his program was shut down, he left the school and took a job delivering pizza. While this wasn’t very fulfilling for him, it paid the rent and he had enough free time on his hands to do some Biblical research. After reading through the whole New Testament, Zach was convinced that the Bible had a deeper meaning. He started looking for interpretations on the Internet. At first, he only found various mystical interpretations that he didn’t feel like he could connect with. Then one day, he came across a mention of Emanuel Swedenborg. He found a downloadable copy of Heaven and Hell but he had trouble understanding it. After more research, he found a video called “Splendors of the Spirit,” which described Swedenborg and his experience in heaven and hell. Zach watched this video a few times. He says, “It really made sense to me and I liked the theology.” He added, “I wanted to know that the things we do are seen and that there is a purpose, here or in the next life.”

Zach realized that Swedenborg had written multiple books. At first he found it difficult to access any of Swedenborg’s works online. There were so many translations and he didn’t know which to read. Eventually he found downloadable documents on the Swedenborg Foundation’s website. Zach started reading the first book of Secrets of Heaven. After reading the first chapter, Zach thought, “Wow! I’ve stumbled on something so awesome.” Unlike the other mystical interpretations of the Bible, Secrets of Heaven seemed to him relatable, consistent and very real. Though he loved what he was reading, he didn’t fully understand it, so he re-read the first chapter. He said that it is not normal for him so be so motivated, but that in reading Secrets of Heaven, he was finding the purpose and direction he so deeply wanted.

After reading and re-reading the first volume, Zach went on to read the second and third. Around this time, Zach left the pizza delivery job and began working as a mechanic. With this new job, he paid off his school debts; after that, the first thing he bought was the complete set of Secrets of Heaven. Then, after reading the series for about a year, Zach stumbled on Bryn Athyn College’s website.

Zach came to Bryn Athyn in 2013 and quickly settled in, loving the school. On the whole he felt like his expectations had been met and he is now enjoying campus life. Zach is excited to learn more about Swedenborgian theology and loves his religion classes. His favorite concept is the New Church’s emphasis on useful service and loving the neighbor. He says, “I enjoy the theology of the New Church because it provides clarity on the purpose and necessity of charity.” Zach is considering being a religion major and staying at Bryn Athyn College for the next three years.

Zach’s schoolmates have expressed how thrilled they are to have had the opportunity to meet such an enthusiastic and sincere person. Hearing his story has been a great reminder of the many people in the world today who may also be seeking what the New Church has to offer. 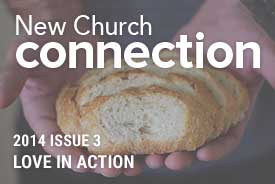