Contradictions in the Bible? (seeking answers)

QWhy does the Bible include so many contradictions?

aOne of my favorite quotes from Swedenborg about the Bible speaks to this very conundrum. It says, “Any of us who are unaware that the [Bible] has a spiritual meaning, like a soul within its body, have nothing else to judge the Word by except its literal meaning…” (True Christianity, 192). There is no question that some literal messages of the Bible cause troubling thoughts, even though some of us see it as the Word of God. For me, the New Church has spoken to this riddle by consistently pointing to the internal messages woven within Scriptural stories. This “spiritual meaning” always shows forth a loving God who leads all people in infinite wisdom to a life of usefulness and eternal happiness.

QIf Emanuel Swedenborg was a revelator, why are some of his statements scientifically inaccurate?

aThose who have studied Swedenborg as an historic figure quickly recognize him as a gifted scholar, arguably more knowledgeable about science, philosophy and religion than anyone of his day. Readers of Swedenborg’s theological works recognize that he drew on much of this knowledge base in his writing. If we view his works as a revelation, and Swedenborg himself as a revelator, what we have, then, is eternal truth from God filtered through the mind of a human being named Emanuel Swedenborg. The eternal truths are there to be absorbed, even if a few of the examples used to illustrate them are based on scientific data of the day that has since been shown to be inaccurate.

QDid the miracles of the Bible really occur in this world in history?

aI personally believe they did. Many of us are aware of Biblical theories that explain these miracles in terms of smaller events that were blown up into miracles through oral tradition. But there is ample reason to embrace the simple belief that an all-powerful God could perform miracles as stated in the Bible narrative. One New Church teaching puts it this way: “Divine miracles spring from Divine Truth and take place in accordance with true order. Effects on lowest [natural] levels are miracles when it pleases the Lord that they should present themselves in that form” (Secrets of Heaven, 7337). According to this teaching, miracles are like everything in the Word of God—designed to house powerful spiritual truths within the actual events that occurred in the Lord’s providence in history.

aFor me, the answer to this question is two-fold. On one level I think, of course the Bible is trustworthy: it delivers God’s truth to us, and should be considered authoritative. And, God calls us to use our reason when absorbing the truth that comes to us via the Bible. The Golden Rule, for example—“Whatever you want others to do to you, do also to them”—is altogether to be believed and done. Good things will come to people’s lives if they live that teaching, leading them to believe that God’s teachings can indeed be trusted. But there are problems with the “eye for an eye” commands of the Old Testament, which have been used to justify destructive activities. The theological writings of Swedenborg shed incredible light on these questions, helping us to see when the stories or sayings are “appearances of truth” that house deeper ideas and when the teachings are genuinely to be believed and done as stated in their literal form.

QIs Jesus the only way to salvation?

aOne of the most powerful concepts taught in the New Church is that the Lord Jesus Christ is the one God of heaven and earth. One teaching along these lines says, “The Lord’s mercy is infinite and will not let itself be limited to the few who are inside the Church. Instead it reaches out to all in the whole wide world” (Heavenly Secrets, 1032). My personal belief is that the Lord Jesus Christ is the only one who can get me, or anyone else, to heaven. He does so by working through the many religions of the world, and through the many relationships that each of us has, to lead us to a Godly and other-oriented life. 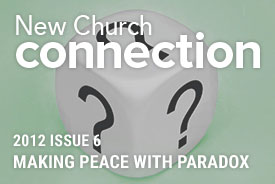