“Immediately Jesus made the disciples get into the boat and go on ahead of him to the other side, while he dismissed the crowd. After he had dismissed them, he went up on a mountainside by himself to pray. Later that night, he was there alone, and the boat was already a considerable distance from land, buffeted by the waves because the wind was against it. Shortly before dawn Jesus went out to them, walking on the lake. When the disciples saw him walking on the lake, they were terrified. “It’s a ghost,” they said, and cried out in fear.

Then Peter got down out of the boat, walked on the water and came toward Jesus. But when he saw the wind, he was afraid and, beginning to sink, cried out, “Lord, save me!” Immediately Jesus reached out his hand and caught him. “You of little faith,” he said, “why did you doubt?” (Matthew 14:22-31)

One of the often related and poorly understood miracles of Jesus is walking on water. People who miss its true meaning may joke about it or question whether such a miracle could possibly happen. Why did Jesus walk on water? Was it to prove His miraculous power? If so, why at night with so few witnesses?

Within the stories of the Bible there are hidden, deeper meanings. If Jesus was trying to prove to the world that He could walk on water, He would not have chosen to do it for just a few disciples at night. There is a deeper reason for this story.

The Bible doesn't say what Jesus prayed for alone on the mountain in this story. But another time when He prayed alone, He told His disciples, “My soul is very sorrowful, even to death,” then he went and prayed, “O My Father, if it is possible, let this cup pass from Me; nevertheless, not as I will, but as You will.”

Often such spiritual or emotional crises are like storms or like drowning. Once King David prayed, “Save me, O God! For the waters have come up to my neck. I sink in deep mire, where there is no standing” (Psalm 69:1-4). David was asking to be saved from drowning, but he was speaking metaphorically. It was not water that was overwhelming him, but fear, doubt and other negative emotions rising up out of hell and dragging us down.

It may have been the same kind of prayer that Jesus prayed on the mountain that night, and like His final prayer before His crucifixion, it would not have been for himself alone but also for his disciples and the whole world (John 17:20-21). He was probably on that mountain going through His own struggles and storms, while thinking at the same time of His disciple struggling to survive the storm out in the boat. When Jesus came to them walking on water towards the end of the night, it was a metaphor for His ability to rise above and overcome all the negative emotions that threaten to overwhelm us. He was telling His disciples (and us), “All the fear, worry and anger in the world can’t overwhelm Me.”

Now Peter said, “Lord if it is You, command me to come to You on the water.” It wasn’t simply that Peter wanted to show off. He wanted help! He saw that Jesus was unperturbed by the violent storm, and he wanted Jesus to give him the courage, strength and faith to rise above his fears and doubts. So Peter’s walking on water was symbolic of how we can rise above our negative emotions when we follow the Lord’s command.

Now when Peter saw the wind and waves he began to sink. One of the traps of fear and worry is they grow by claiming our attention. We think about the things we fear; we obsess about them, and the fear grows. The more we worry about things that could go wrong the more things we can imagine that might go wrong. The more we nurse our resentments the more things we find to resent. So when Peter stopped looking at the Lord and started thinking about the wind and waves, he was soon overwhelmed.

Peter called out to the Lord and the Lord pulled Him up, and I think the promise of this story is that the Lord can do something similar for each of us. Now in my half century I have never seen anyone who was able to literally walk on water by calling on Jesus, but I have known many people who have found that asking the Lord’s help lifts them out of worry, fear, self-pity, depression and grief.

Often the Lord’s help doesn’t happen as soon as we want it to. Why did Jesus wait till the fourth watch? It is only through despair that we reach the point of completely depending on the Lord.

Few if any of us will walk on water through faith in Jesus, and yet we can see a miracle that is even greater--we can rise above worry, fear and resentment when we turn to the Lord and resist the desire to do evil. This will give us a sense of peace even in the middle of the most challenging crises.

The Rev. John Odhner is an Assistant to the Pastor at the Bryn Athyn Church. For more information, visit www.brynathynchurch.org. 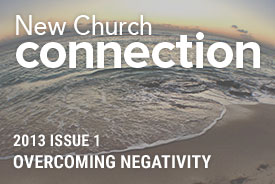