"Christ prayed. He's the divine in human form, and he prayed when he was anxious. He prayed for help and support."

What has been your experience with prayer, and how has it evolved?

When I was a child, I used to pray to help myself fall back asleep. It was always comforting and it gave me a sense of connection with the Lord.

Then, in my 20s and 30s, I felt pretty self-reliant and didn’t think I needed prayer. I certainly didn’t think of it as a regular practice. The only time I would pray was when I really needed help. Prayer didn’t really start to come back in a big way until later in life.

When I became a parent, and I had these little kids that were so dependent on me, I started praying again. This time it was a different kind of prayer- it was a prayer for protection. I remember one winter my wife Barbara and I decided to drive the kids to Disney World. It would be 2200 miles of driving in 7 days, so I was choosing to put the family at somewhat of a risk. So Barbara and I prayed together. We said, “We want to have a fun family vacation. Thank you for keeping us in your care. We love you and we love each other.” Then when we returned, we said a prayer of thanks. So our trip was like a circle of gratitude – it began and ended with prayer.

Now that I’m older, and my kids are starting their own lives, I pray more than ever. But it’s different. It’s almost like continual prayer. I’m walking my prayers, breathing my prayers. I’m breathing in the prayer, and breathing out my worries. I breathe in the prayer, and I breathe out my need for control. Breathing becomes a restoration. I don’t even do it consciously, but sometimes I think about it consciously. Although I don’t consider myself a “conscious being,” I think that’s how a conscious being would live.

What spiritual teachers or traditions have inspired your current practice of prayer?

When I was a teenager, I used to read Jiddu Krishnamurti, a Buddhist writer. He was a famous philosopher and thinker from India. He wrote about meditation and consciousness and prayer. I used to really enjoy reading those books – the eastern concepts of prayer and meditation. I especially liked the concept of self-control. I learned that I could invite the Divine into my own mind to quiet my mind, instead of letting my thoughts bounce around like a billiard ball.

Herman Hesse was a German writer and was also a great influence on me. He conditioned my mind to focus on spiritual things. His ideas were always full of prayer.

I also always admired the monastic tradition, with its values of the contemplative life, with prayer and meditation in the Christian sense. There were devotionals, vespers, and morning prayers. I love the Catholic tradition around prayer with its Gregorian chants - they are like musical prayers.

One thing I admire about the Baptists is that they tend to be really good at prayer. They really know the Lord and they really love him. Same with Catholics. My sister-in-law is a nun and a very prayerful, saintly person. She’s been a wonderful role model for me. Even though I’ve never seen her pray, she shows me what it is to be prayerful. It’s in her disposition. In her unconditional loving presence. It’s in her lack of strong opinions, and in her desire to connect with others in a genuine way. She’s always conveying the message, “How are you? I want to know how you’re doing.”

Another thing that has impressed me is the lives of the Catholic saints. St. Teresa of Avila is one, as well as all those who’ve given themselves to a life of devotion and service. But you don’t have to become a priest or nun – I have friends that I admire who live that same kind of prayerful, service-oriented life.

Dr. Wayne Dyer is a great model of a man my age, and in my generation who seeks spiritual connection in the difficulty of life.

And of course, Christ prayed. He’s the divine in human form, and he prayed when he was anxious. He prayed for help and support. He separated from others so he could pray, and he also prayed with others and taught us how to pray. So I think prayer is huge in maintaining your spiritual life.

How has prayer affected your work as a pastor?

Prayer is so important as a pastor. Sometimes I am with people who I know are struggling, but I can’t talk to them about it directly because I don’t want to be too heavy. So we’ll keep it light, and joke around. But at the end of the meeting, I’ll say, “Let’s have a prayer.” We come physically close, and I hold their hand. It’s very emotional, tender and intimate, to hold someone’s hand. Then, during the prayer, I can communicate the things I can never say face to face. In the prayer, I can show how much I love them. I can tell them my deepest heart’s desire for them.

I might say something like, “Look down on your servant [so-and-so]. He or she has been facing [certain challenges], and therefore, Lord, inspire them with confidence and strength. Help them to turn to you. Comfort them through your presence and through your Word. I love you. I want to lift you up.”

This process of holding someone’s hand and praying for them - it’s so refreshing. I’ve seen people extremely moved simply from being prayed for. And this is not just a priest thing. It’s a believer thing. We are believers, so we should be able to do this for each other. I think the spiritual life in our church can develop in the future to include more prayer in our programs and in our lives.

How has prayer affected your marriage with Barbara?

Barbara leads me. When we first met, she would often be the one to say, “Let’s pray together.” This was important to me. I got used to it and I began to really like it.

Sometimes, if we passed a church, she would say, “Let’s stop in here and pray.”

At first I might be unsure about doing it, but it was always worth it. After you take that time to pray, your whole day is different.

We were living and working in New York at that time. So with all the hustle and bustle of city life, it always felt good to sit in the church. It’s quiet, and you can put your mind at ease for 15 minutes before going back to your day. It was a chance to experience “kairos” time. You see, there is cronos time (the linear time we are familiar with), and kairos time, the time that spans eternity. When, in the middle of the day, we take time to kneel down and say a prayer, we experience a moment of kairos time.

So now prayer has become a really important part of our marriage relationship.

Often we get used to praying in a ritualized way, like only in church. But it’s something very different to say to your partner, “I’m troubled about this. Would you kneel down with me and pray?” Or in the morning before going to work, to say, “I’m feeling disconnected. Would you pray with me right now?” Or to stop in a busy street and pray. This takes prayer to a whole different level. You realize that you don’t have to be in an emergency room to pray; it doesn’t have to be a last resort. There are everyday situations where praying with your loved ones can be exactly what you need.

And I know that this isn’t the case for everyone - not everyone actually enjoys prayer. It’s something that you grow into through practice. It happens gradually.

Some people say that it’s foolish to expect prayer to have an actual effect. What would you say to the skeptics who don’t see the value in prayer?

To the skeptics, I would quote the 11th step from the 12 steps of Alcoholics Anonymous. It’s about how prayer improves our conscious contact with God. In prayer, we are asking only for the knowledge of God’s will, and the courage to carry it out. Instead of praying to get things to go our way, we simply try to have a conscious contact with the Divine, to learn God’s will, and ask for power to do it.

How would your life be different if you stopped praying?

It would be like a plant that gets dry, shrivels up, and eventually dies. For me, prayer is like water. It’s an avenue to reconnect with the Lord. I wouldn’t say that others have to pray, but if a person feels called by the Lord, and from a series of coincidences, they start feeling a desire to pray, or a desire to pray for guidance, then I would say by all means, try it! And prayer can be different things for different people. Some homes, like many in Japan, have shrines to remind the family members to pray. When you see the shrine, you recognize that the Lord is present. Even looking at pictures of people you love, it can seem like there’s a halo of prayer around that person.

What could prayer do for the world, on a grand scale?

In every religion there is a big emphasis on prayer. I think if we honored all the faith traditions through prayer, and if everyone prayed 3 times a day, the way some faith traditions do, the world would be a better place. It would help unify the world.

Our prayers would naturally begin with a focus on healing and comforting ourselves, but then they would gradually move toward healing and caring for others. We would remember that the will of God is certainly is nothing other than love and service.

Jay Barry is the pastor at the Glenview New Church in Illinois. 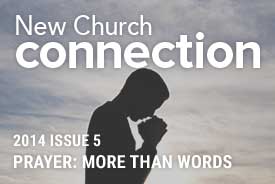