Why was the Lord born on earth?

The Lord was born into the world not to die, but to live and to do this in a way that showed people that He truly is the king of heaven and earth—to show Himself as God.

The Lord Himself explains why He was born when He says to Pilate: “You say rightly that I am a king. For this cause I was born, and for this cause I have come into the world, that I should bear witness to the truth” (John 18:37).

The Lord’s birth and life in this world allows us to see God as a human being. Before this, Jehovah could only be seen as an angel (the Angel of the Lord who spoke to Joshua, for example) or an inhuman, disembodied voice in clouds and fire (in the burning bush and atop Mount Sinai, for example).

Jesus showed Himself—that is, God—to be human not only in shape but in character, too. The people around Him could see Him, talk with Him, travel with Him, and get to know Him. As He said, “If you really knew me, you would know My Father as well. From now on, you do know Him and have seen Him”(John 14:7). For the first time, Jehovah showed Himself directly to people in a way they could understand—that is, in a way they could see Him for who He really is.

What about us today, who have never seen Jesus? True, we have never seen His body, but a person is not his or her body. When we first meet people, we might describe them by their height, hair color, or clothing. But when we get to know them, we are more likely to described them by the things they love and the way they live life.

The same is true for the Lord. He was born in this world and lived among people not so that they could see the color of His eyes, but so that people both then and now can come to know Him as a human being, a Divine Human.

His birth also allowed others to see God not as a powerful king, but as a powerless infant. This appearance allowed the forces of hell to attack Him the way they attack us, as is illustrated by His temptations in the wilderness (Matthew 4:1). The Lord in His glory is a refining fire, consuming all evil and completely unapproachable by an evil spirit (Malachi 3:2). But when the Lord was born as all of us are, with all of our weakness and corruptibility, evil spirits saw an opportunity to destroy the Lord.

His victory in battle with the forces of hell, a conflict commencing at His birth and continuing daily until His death, is the way the Lord saves people, even us today. By overcoming all temptations, He gained total dominion over evil and put the hells back into their place. Now, not only is the influence of evil kept in check, but He can remove any evil from any of us, if we but permit Him to do so.

The Lord was born on earth to save the human race and everyone in it. By showing Himself visibly as a Divine Human, He allows us to know Him and relate to Him. And by restoring the balance between the influences of good and evil, He makes it possible for us to use that knowledge and relationship to ask for and accept His power, His mercy, and His love. 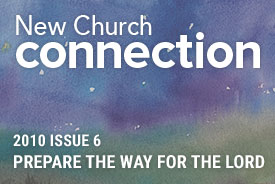