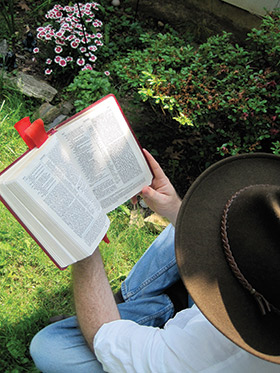 The Rev. Pearse Frazier interviewed the Rev. John Odhner on this subject for his weekly podcast, the ChapmanCast. A portion of their conversation is given here.
(Edited by Chad Odhner)

ChapmanCast (CC): Someone recently accused me of adding to the Bible by trying to interpret it. Does the Bible have a deeper meaning or should we be taking it literally?

John Odhner (JO): The question is whether there is a deeper meaning in the Bible already. If there is no deeper meaning then we might be adding to it by trying to interpret it. But if it was intended to be taken with a deeper meaning, and we strip it out with our method of interpretation, then we are taking away something that’s given by God through inspiration. We’re saying, “No, I don’t want to pay attention to that part of the Bible.”

CC: Does the Bible have rules for how we should read it?

JO: I haven’t found any passages that say anything should be taken strictly literally. Conversely, I’ve found dozens of passages that say, “There is symbolism in here, look at this on a deeper level.” I like to start with the young man who asks Jesus, “What’s the most important commandment in the Bible?”(Matthew 22:36). It’s as if he’s asking, “What’s the most important thing for us to know about the Bible?” Jesus says, “Love the Lord with all your heart and love your neighbor as yourself. On these two commandments hang all the Law and the Prophets”(Matthew 22:37-40). So everything in the Bible is about loving God and loving your neighbor, and if we read about all the details in the tabernacle, for example, well what’s that got to do with loving God and the neighbor? Jesus was telling us, “Look for something deeper there! The tabernacle was symbolic and if you’re missing love for God and the neighbor in any part of the Bible, you’re missing the main message.”

CC: What do you make of Jesus’ parables as a guide towards understanding that everything is about loving the neighbor and loving the Lord?

JO: Well, first of all, Jesus told a lot of parables; the Bible even says, “Without a parable, He did not speak to them”(Matthew 13:34). In other words, He was always telling stories that have a deeper meaning. Not only that, but when He refers back to the Old Testament, He often refers to stories that have a deeper meaning. For example, Jesus talked about the manna which came down from heaven for forty years in the wilderness. But Jesus made that a symbolic story about Himself, saying, “Moses did not give you the bread from Heaven, but My Father gives you the true bread from heaven.” And He said, “I am the bread of life”(John 6:32-35). Another example: Jesus said, “See this temple? If you tear it down, in three days I will raise it up again”(John 2:19). He wasn’t talking about the temple literally; He was talking symbolically about Himself, because He is the dwelling place of God on earth (John 2:21). And so, when we look back at the temple or the tabernacle, we know from what Jesus said that those are symbols and representations of Him.

CC: But does that open the door to interpreting the Bible however we want to? I think that’s a real concern for some people. How do we restrain ourselves from having the Bible mean anything we want it to mean?

JO: The passage I started out with gives us a guide: everything in the Bible hinges on loving God and loving the neighbor. I’m sure you know the story of how Jesus, after His resurrection, was joining His disciples on a walk to Emmaus. He told them all the things concerning Himself that were in the scriptures. So the people who say, “Don’t look for a deeper meaning,” might as well be saying, “Don’t look for Jesus in the Old Testament because you’re adding something.” But it’s not us adding something; it was Jesus, who wasn’t even adding it then, but saying, “It was there all along.” And the New Testament can be understood this way too. When they crucified Jesus, for example, that was a real event but it was also symbolic—portraying the way the Bible would be treated. So when we take the literal meaning of the Bible without the deeper meaning, it’s kind of like what happened when they stripped Jesus of His garments. They said, “We’ll take the garments and we’ll kill the person.”

CC: Well it’s interesting to think that they then tore those garments up. Some people interpret the Bible in different ways, picking and choosing particular passages—paying attention to the letter of the Bible but forgetting how the Lord said, “The two most important things for you to remember: love the Lord and love your neighbor.”

The Rev. John Odhner is a content developer for General Church Outreach. 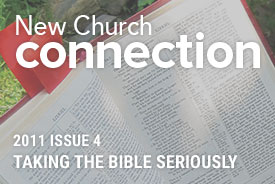