The Beginning of the New Church 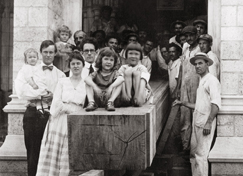 Bryn Athyn Cathedral under construction. It was dedicated in 1919 for the worship of the Lord Jesus Christ.

During the latter part of Emanuel Swedenborg's life, there were isolated readers of his Theological Writings, often referred to as "the Writings" or "Heavenly Doctrines." These readers were scattered across Europe, especially in Sweden, France, Germany, and England. In 1783, just ten years after Swedenborg's death, an organization was formed in London with the purpose of reading, discussing, and eventually translating Swedenborg's Latin Writings into English. As the new translations were made available, readership increased. Initially the Writings were taught alongside conventional Christianity, but in 1787, it became clear that the new doctrine could not be preached in conjunction with the old. The group broke away to pursue independent worship. This was relatively easy to do in England's atmosphere of religious tolerance.

In Swedenborg's homeland, however, things were different. Threats of persecution hampered the spread of the Writings. Ministers who were receptive to Swedenborg's ideas were forced to repudiate them, and if they refused they were tried for heresy and suspended from their ministerial duties. In Sweden, the New Christianity, also called "Swedenborgianism," could not seek legal establishment until 1875.

But official recognition by the state did not dampen the enthusiasm of early Swedish "receivers" (as they were called). For example, in 1779, Charles B. Wadstrom was so moved by Swedenborg's reports of the character of Africans that he became one of the fathers of the movement to abolish the slave trade. As one writer puts it, "This preceded all other efforts in this direction and gives the New Church the credit for originating this mighty crusade." (Block, The New Church in the New World, p.54)

In other parts of Europe, the Writings were favored among sensation-seeking "spiritualists" which injured the cause of this New Christianity. Only in England, an early center for religious freedom, was there a strong Swedenborgian movement guided by a responsible priesthood. In 1857, the British Conference reported 3000 members, 48 societies, and six New Church schools. Growth continued slowly: many people listened to the doctrines, read them in their homes, and were deeply influenced by them (including individuals such as William Blake, Robert Browning and Thomas Carlyle) but not all became active church members.

The Church in America

The doctrines were first publicly taught in America in 1784 in a lecture by James Glen, a planter who stopped off in Philadelphia on his way from England to British Guiana. A shipment of Swedenborg's books addressed to him arrived after he had left and was sold by auction. Soon, a group of readers formed in Philadelphia around the family of Francis Bayley, who became the first publisher of the Writings. In 1792, a society was begun in Baltimore and was reorganized by the Rev. John Hargrove in 1798. He was ordained by the laying of hands by ten laymen. Hargrove preached before President Jefferson and both houses of the United States Congress in 1802 and again in 1804. A General Convention dedicated to the Writings was organized in Philadelphia in 1817 and later developed along congregational lines.

The church in America grew slowly but steadily. Up and down the Atlantic Coast, small groups of readers formed around the Writings and were occasionally visited by New Church missionaries. One such missionary was a young man named Jonathan Chapman, known today as "Johnny Appleseed." From the cider mills of Pennsylvania, Jonathan Chapman traveled barefoot among the pioneer settlements of Ohio, planting orchards in the river valleys and spreading the new doctrines wherever he went. He did this by literally tearing out pages from the Writings and giving them to settlers along the way. On his next visit, he would collect the pages and give them new ones to read. He referred to these pages which he freely disseminated—along with his apple seeds—as "good news fresh from heaven."

By 1850, thanks to the efforts of missionaries like Johnny Appleseed, the General Convention (the American branch of this new church) had a membership of 1,450 with 52 societies and 32 ordained ministers. In 1889, membership had increased to 7,028.

From early in its history, there have been differing views about Swedenborg's Theological Writings. Some have regarded them as helpful commentaries on the Scriptures and as a useful, but not infallible, guide to life. Others saw them as coming with Divine authority and signifying a New Christianity—a New Church, with a distinctive doctrine which was nothing less than the Second Coming of the Lord. Among those who rallied for the latter were Rev. Richard de Charms and later, his protégé, Rev. William Henry Benade. Both were passionate about New Church education for children and worked to establish schools along the East Coast.

None of these initiatives really took off until 1876 when "The Academy of the New Church" was founded under Benade's leadership in Philadelphia.

The primary effort of the institution, which began with only a few students, was to provide for the training of a New Church priesthood. Soon, however, it attracted to its support many Swedenborgian scholars from America and England. Owing to the zeal of its leaders and generous endowments from church members, the Academy grew. Today it includes secondary schools for boys and girls, a four year college and a theological school which trains ministers from every continent and a graduate program in religious studies. It is also affiliated with the local Bryn Athyn schools and other New Church schools around the world.

As the Academy movement evolved, its views on baptism and leadership began to stand in sharp contrast to those of the Convention. The consequence was a severance of connections with the Convention in 1890.

During the past few decades, the Academy family, particularly the Bryn Athyn College and the Academy of the New Church Theological School, has become a diverse global community. Students from around the world come to Bryn Athyn to study the arts and sciences in the light of New Church teachings.

The General Church of the New Jerusalem

The organization meeting took place in Alnwick Grove in Pennsylvania, an area 15 miles north of Philadelphia. This locality, now the Borough of Bryn Athyn, became the site for the Academy as well as a growing New Church community of over 3,000 people.

The General Church Since 1900

The growth of the General Church in the beginning of the 20th century was slow but steady. In Bryn Athyn, endowments from the Pitcairn family funded school buildings for the Academy of the New Church. During the war years of 1914-1918, John Pitcairn built the now famous Bryn Athyn Cathedral, an architectural and artistic masterpiece which attracts thousands of visitors every year.

As the General Church grew and spread, strong church communities developed in other countries, notably England, Sweden, Holland, France, Canada, and Australia. In 1919, Bishop Pendleton ordained a group of ministers in South Africa.

After the Second World War, enrollment in the Academy increased substantially. In response, more buildings were erected to accommodate the influx of students. In the latter part of the century, the ministry almost doubled in size and an expansion of evangelization work was initiated to spread awareness of the new teachings and further grow the church.

The growth of the New Church has continued into a new century. The church has a presence in many more countries around the world, such as Brazil, Japan, Korea, China, the Philippines, Ghana, Kenya, the Ivory Coast, Russia, and the Czech Republic. Efforts have been underway to translate Swedenborg's Writings into various other languages, such as Spanish, French, Russian, Chinese, Korean, and Zulu. The Bryn Athyn College campus is undergoing an ambitious building project aimed at tripling enrollment over the next ten years.

At the same time new centers for theological training are being established around the world. As Helen Keller said, in her tribute to Swedenborg and the New Church, "True Christianity will yet inundate the world like the ocean at floodtide; it will overwhelm, submerge and regenerate mankind. No manufactured barrier of warships, armies or fortifications will stay the oncoming of these mighty waters." (Light in My Darkness, 1994, p.123)

"Nobody, not even an angel, can know all the different ways in which people accept the Lord."

New Jerusalem and Its Heavenly Doctrine 86